The Paternalistic Academic-Industrial-Complex of Feminism

Here are some excerpts from Feminism for Real: Deconstructing the Academic Industrial Complex of Feminism, edited by Jessica Yee. (Excerpts via Racialicious):

[W]e’re not really equal when we’re STILL supposed to uncritically and obediently cheer when white women are praised for winning “women’s rights,” and to painfully forget the Indigenous women and women of colour who were hurt in that same process. We are not equal when in the name of “feminism” so-called “women’s only” spaces are created and get to police and regulate who is and isn’t a woman based on their interpretation of your body parts and gender presentation, and not your own. We are not equal when initatives to support gender equality have reverted yet again to “saving” people and making decisions for them, rather than supporting their right to self-determination, whether it’s engaging in sex work or wearing a niqab. So when feminism itself has become it’s own form of oppression, what do we have to say about it?

END_OF_DOCUMENT_TOKEN_TO_BE_REPLACED

In The Charlie Sheen Guide To Passing A Job Interview, John P. Lopez provides a very compelling case that answering interview questions exactly like Charlie Sheen would get you hired. I argue that job seekers applying for the position of a “rock star programmer” at a tech startup would do especially well if they had the aura of Charlie Sheen.

Let’s say you were an employer, looking to add to your sales staff? Wanna play? Here are some typical job interview questions and REAL Charlie Sheen answers.

Admit it, you’d hire the guy if you didn’t know any better:

What is your greatest strength?

﻿”I’m proud of what I created. It was radical. I exposed people to magic. I exposed them to something they’re never going to see in their boring normal lives.”

How many hours do you normally work?

“Sometimes sleep is for infants. I don’t sleep. I wait. When I can’t sleep I don’t fight it. I just figure that there’s a higher calling.”

What is your greatest weakness?

“I am on a drug. It’s called ‘Charlie Sheen!’ It’s not available because if you try it once you will die. Your face will melt off and your children will weep over your exploded body.”

What are your salary expectations?

“I’m not [broke] but I was kind of counting on some of that money to get me through the summer. Now I’ve got to like work. But that’s alright. Work’s good. Work fuels the soul.”

What do people most often criticize about you?

“You borrow my brain for five seconds and just be like dude, can’t handle it, unplug this bastard. It fires in a way that is, I don’t know, maybe not from this terrestrial realm.

Seriously, there is something very wrong with a culture in which programmers’ outrageous self-descriptions are taken at face value.

Men tend to over-estimate their abilities and self-promote more than women when it comes to math and coding ability. Instead of hiring programmers who act like Charlie Sheen, recruiters and interviewers should take imposter syndrome into account.

Othering and Projection: Chinese is confusing vs. Chinese are confused

In English, a person says, “It’s all Greek to me,” when they do not understand the words of someone else. In Greek, when a person does not understand, they say it sounds like Chinese. Many languages have an expression that names another language as epitome of unintelligibility. It turns out that in a directed graph, most languages converge on Chinese as the unintelligible language. 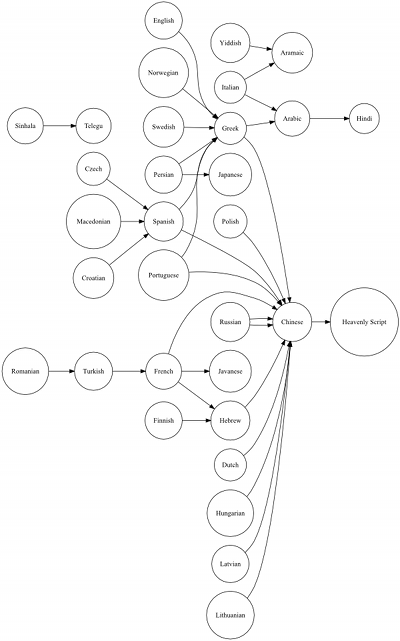 However, there is a difference between finding Chinese writing confusing and alleging that Chinese people are confused.

END_OF_DOCUMENT_TOKEN_TO_BE_REPLACED

If tech discussion was really about tech, it wouldn’t be sexist.

There is sexism in tech culture. However, I continue to love tech, because I think of the sexism as a separate, unnecessary appendage to pure tech. I cannot think of sexism as intrinsic to or inevitable in tech, because then I would be either self-hating, or I would have to give up my love for technology. Maybe my personal ontology is compartmentalized thinking in order to survive as a woman in tech, but I think it’s also true.

Actually, what I hate most about tech news sites is that when I go there for technology news, there are off-topic comments about love and relationships. It’s typically men discussing being single; having trouble with women; being Nice GuysTM; giving advice about what women really want; talking about how women have it easier; bragging about how even their grandmother/mother/wife can use technology X; and other sexist generalizations about women. In other words, the idea that pure tech scares away women, that tech culture is currently free of human influence, is a product of male privilege and the inability to recognize that the state of being male is not the state of being neutral.

END_OF_DOCUMENT_TOKEN_TO_BE_REPLACED

In What does cultural competence look like? resistance of Resist racism discusses the problem of “cultural competence” through learning cultural “facts”. A recurrent problem with this is that white people often use some “fact” they learned in a text about how a non-white group allegedly behaves to stereotype individuals of that demographic.

For example, in my immediate family, my father is the only male. We are Chinese. A white man had dinner with us, and asked my father about our family’s position regarding a common political debate. My father is conservative, so he offered his standard conservative reply, which was incongruent with the rest of us, who were on average left of liberal. After hearing my elderly father’s opinion, however, instead of turning to us and hearing ours, the white man was satisfied with my father’s answer and began discussing another topic.

This white man assumed that there was no point in asking about our thoughts, because we were Chinese daughters and a Chinese mother, so our opinions must match that of my Chinese father. Before this incident, I had never had the experience of being shut out of a political debate because of my gender. Ironically, it was the racist stereotype of Chinese women being submissive to Chinese men that actually resulted our political voices being silenced.