This is cross-posted at Geek Feminism.

In the futuristic city of Metropolis, Cindi Mayweather, a.k.a. Android # 57821, falls in love with a human named Anthony Greendown. As a result, the Star Commission schedules for her immediate disassembly. Cindi Mayweather hides in the Neon Valley Street District, while card-carrying android bounty hunters are urged to capture her for a reward. The Droid Control Marshalls forbid the bounty hunters from using phasers that day; they can only use chainsaws and electro-daggers. 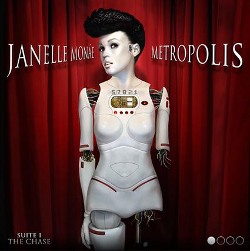 Monáe herself has said how indebted to the SF canon she is: In interviews she’s gushed about Philip K. Dick, The Matrix, Metropolis (a film she pays visual tribute to on the cover of The ArchAndroid), and most often Octavia E. Butler, a visionary writer whose ethnocentric SF clearly marks her as Monáe’s aesthetic godmother. […] Monáe isn’t dabbling in SF. She takes the stuff passionately and seriously.

In her lyrics, Monáe alludes to Do Androids Dream of Electric Sheep?, kryptonite, and thinks of herself as “something like a Terminator“. (On the other hand, her lyrics also include some ableist (and nonsensical) phrases like, “shake it like schizo”.)

From her first album, Metropolis, the music video for “Many Moons” is about an Annual Android Auction featuring a performance by Cindi Mayweather, in which Monáe dances erratically and does the moonwalk:

If you liked that video and want more highly-polished videos by Monáe, check out “Tightrope”, which is not sci-fi-themed but has fantasy elements and gender-liberating dancing, as well as the trailer for The ArchAndroid, in which the camera pans around a futuristic city-scape that turns out to be Monáe’s hat.