“Black or white”, “East or West” are not racially or culturally exhaustive.

Black (#000000) and white (#FFFFFF) are opposite colours, because they have opposite RGB values. As these colour names have been used as labels for racial categories, sometimes Americans make the mistake of thinking that black people and white people are opposite races, or that “black or white” is a racially inclusive term.

Although the United States’ history of slavery may be the origin of the false black-or-white racial dichotomy, the mapping of these racial labels on to colour analogues reinforces the notion that “black or white” is racially exhaustive. 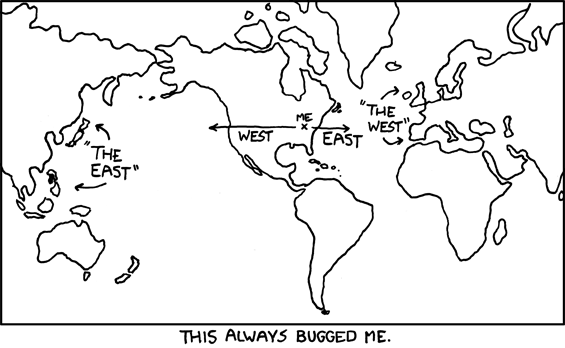 The only thing that is common to all Western countries today is not geography and not technological development, but the fact that they are majority-white countries.

Many people (including psychologists) even think that if a phenomenon occurs in both a Western society and an East Asian one (since East Asia is the most East), then the phenomenon is “cross-cultural” and exhaustive of all possible cultures. They incorrectly assume that cultural variation lies on a one-dimensional continuum, with “East” on one end and “West” on the other, as if culture can be understood as cardinal directions, and by using a cultural sample size of 2.

People use colour language to discuss race, and cardinal direction language to discuss culture. However, people then perceive parallelisms between race and achromatic colours, and between culture and cardinal directions, that do not actually exist. Language affects thought, and in these cases, language encourages people to develop incorrect assumptions about racial and cultural realities.

8 Responses to ““Black or white”, “East or West” are not racially or culturally exhaustive.”