Finally, somebody summarized the myths that non-Chinese Americans have about Chinese food. Most of what White Americans consider “Chinese food” is mostly eaten by white people, and would be more accurately described as “American food” (and perhaps even “white people food”).

Jennifer 8. Lee has a great video on TED Talks titled, Who was General Tso? and other mysteries of American Chinese food.

Here are some important points from the video: 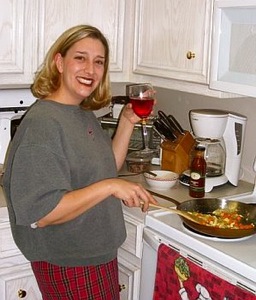 These myths that most White Americans have about “Chinese food” are not trivial. Generally, false assumptions beget false conclusions and distorted worldviews. When most White Americans believe that American foods like chop suey, General Tso’s chicken, and fortune cookies are “foreign” and “Chinese”, some effects include:

Jennifer 8. Lee’s Italian friend was surprised to learn that fried gelato did not originate in China, and remarked, “It’s not? But they serve it at all the Chinese restaurants in Italy!” This incident illustrates the limitations of anecdotal experience as a source of knowledge. Even if the sample size is very large, anecdotal experience does not take into account selection bias. In this case, a biased sample lead to false conclusions about an ethnic minority group’s “culture”.

Perhaps the dish is also 1% Chinese, since the dish’s name was transliterated into English from the name of a Chinese person, and the people who serve it tend to be Chinese Americans.

However, fond memories of eating General Tso’s Chicken is a culture that is shared among more White Americans than Chinese Americans.